Candy (Luke Mullins) is about to celebrate his/her 35th birthday, though perhaps ‘celebrate’ is wrong – his long-term lover has 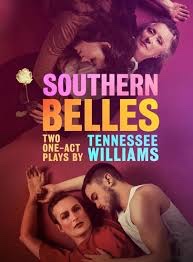 just left him for a younger edition, and Candy is preparing to seduce a bit of rough, a surly young sailor on shore leave in New Orleans. There is no possibility that the evening will go well.

This is the premise of the second of two Tennessee Williams one-act plays “…and Tell Sad Stories of the Death of Queens”, put on at the King’s Head as the headline show of its Queer Season. Williams wrote it in 1955 when his star was riding high, but it was never produced in his lifetime, probably because it is his only play to feature explicitly gay characters. It is beautifully and delicately brought to life by Luke Mullins, who is camp and prissy but also shows the strength required to express his authentic self in a society that punishes that expression. George Fletcher puts in a fine turn as the sailor; moody, sullen, on the verge of violence, and an exploitative brute, Williams doesn’t give Mr. Fletcher much space to work with, but his self-disgust and uncertainty are well drawn. Michael Burrows and Ben Chinapen make up the rest of the cast, and their main job is to touch in very pleasant background music, including show-tunes in waltz time. This they manage splendidly, and also make their brief on-stage appearance as the gay lodgers who come to Candy’s aid very affecting. But the evening belongs to Luke Mullins, and his performance is tremendous; moving, sensitive, and for a character so distant from me in history and in affect, very easy to identify with, to sympathise with, and to understand. Which is, after all, what theatre is set up to do.

The first play, “Something Unspoken”, is the story of a Southern Grand Dame Cornelia (Anbabel Leventon) and her long-term secretary/companion Grace (Fiona Marr). It is the day for election to office in Cornelia’s chapter of the Daughters of the Confederacy, and Cornelia is plotting. As her agents telephone to inform her of the success or failure of her schemes, she attempts to verbalise the simmering feelings she has for her companion of fifteen years, but her inability to speak plainly, her hauteur, and her upper-class entitlement, not to mention a constantly ringing telephone, prevent any sort of engagement between the women. The play is about hideously hidebound people spectacularly incapable of escaping their own sense of entitlement, and it goes on way longer than I had interest or sympathy. The delicate, true playing by Ms. Leventon and Ms. Marr was good to watch, but the slightness of the piece made it feel like a long 40 minutes. And why, if a ringing telephone is a central plot point, do you chose to represent the phone with an unplugged microphone, so when Cornelia spoke to her minions, she looked as if she was breathing a sad ballad? Sometimes directors have weird ideas.

Very much an evening of two halves, I took some joy from the delicate playing of the first half, and loved the second play.

I read drama at Hull University in the 70s. I spent eight years as a Community Arts worker in Tower Hamlets, and doing occasional tech jobs, then I taught in East London and participated in shed-loads of community theatre till I retired in 2016. I'm currently reading for an MA in 'Theatre' at the University of Surrey (Guildford School of Acting). Now I go to shows. Lots of shows. And write about them. View all posts by Chris Lilly

London Theater reviews by an American expat - on an improved budget

A suitable break in the performance

everything inspiring -- stageblog -- a voice from the audience

A Guide to London's West End