“Sherlock Holmes in A Scandal in Bohemia! (and other stories).”

It is very easy to like a show if you’re given a gin cocktail and a pork pie when you walk in, and then a very engaging Dr. Watson helps you to your seat. Just sitting down waiting for the action to start, this felt like a good evening. And it was. A five-woman company presented “A Scandal in Bohemia” and selected highlights of the other Sherlock Holmes adventures. The last paragraph of “A Scandal in Bohemia” runs:

‘And that was how a great scandal threatened to affect the kingdom of Bohemia, and how the best plans of Mr. Sherlock Holmes were beaten by a woman’s wit…’

and it isn’t an enormous leap to suppose that a story in which a misogynistic twonk like Sherlock Holmes gets bested by ‘the woman’ spoke to this company of women. The idea was planted by Conan Doyle, and Struts and Frets ran with it, giggling all the way.

The first thing to say is that this show is very good fun. The shambolic running-around and recostuming, the speed of the cab-horse indicated by increasingly frenetic coconut-shell action, the enthusiasm of both Holmes and Watson for Peruvian Marching Powder (medical strength, not a namby-pamby seven per cent solution), the dropping in and out of character if it helped a gag; all of that made for an energetic and engaging 90 minutes. The pace never dropped, the friendly inclusion of the audience was always up-front, the players enjoyed each others’ work and (I’m guessing) improvisation. Fast, furious, and funny. That’s quite enough for a good night out.

There was a bit more to it than that, however. The Irene Adler story wasn’t chosen by accident, and there was a really well-argued Punch and Judy interlude in which a Mrs. Hudson Judy told off a Sherlock Holmes Punch for his consistently dismissive and patronising treatment of numerous women in various tales. Well researched, well delivered, and true. It didn’t take up much of the show’s time, but it was telling. 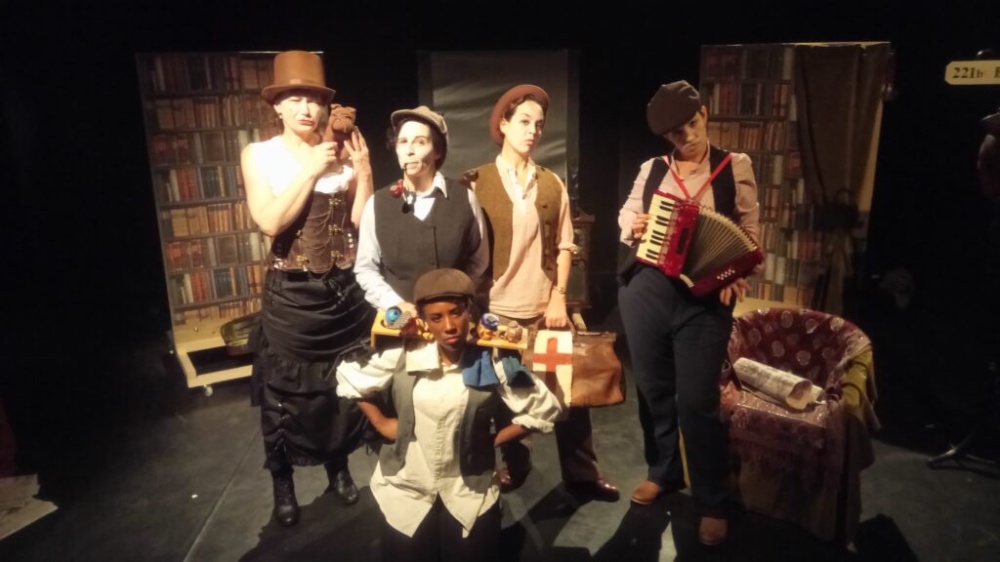 This show was designed to be portable and to fit into a variety of performance spaces, so it was fairly loosely blocked and played in front of three small trucks and a couple of pieces of furniture. The playing style took full advantage of the freedom of action this allowed, the space was used really well, the audience (of all ages) was effortlessly included, and there were extra pies for anyone slow to leave the auditorium. It’s very easy to like a show that lets you have an extra pie, especially if it’s as lively and classy as this one.

I read drama at Hull University in the 70s. I spent eight years as a Community Arts worker in Tower Hamlets, and doing occasional tech jobs, then I taught in East London and participated in shed-loads of community theatre till I retired in 2016. Now I go to shows. Lots of shows. And opine. View all posts by Chris Lilly